adidas Runners is one of the most ambitious attempts at building communities adidas has ever taken before. The goal was to not only set up groups of like-minded runners in cities around the world but to also empower the natural leaders within these groups to self-organize and build their own calendar of different events at a grassroots level – events which adidas would then support (through promotion and occasional swag). Local groups nominated “captains” and “coaches” who took on the responsibility to manage and plan future events, many of which happen several times per week.

Complicating factors here was that approximately a year after the communities launched we entered into Phase 2 of the project: integration with our sister athletics-tracking program, Runtastic (adidas acquired Runtastic in 2015). Tapping into Runtastic’s existing userbase of 130+ million athletes, our plan was to greatly expand the size and number of communities by allowing Runtastic users to join their local running groups from directly within the app. This was the very first technical integration between adidas and Runtastic and required an incredible amount of teamwork and collaboration between teams both external (3rd party development agency, Runtastic infrastructure) and internal (adidas AWS management, network security, CRM, account management). My role as Technical Director was to manage and oversee all of the teams here, facilitating communication (the teams were spread over 5 countries in two separate continents) and ensuring that our stated goals and KPIs were front-of-mind at all stages of development to manage expectations and avoid scope creep.

The end result? Well, in the Runtastic app you can now join running communities around the world. This is continuing to expand into more and more cities so if yours isn’t there, keep checking back! 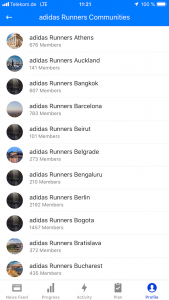